We are very proud of what we offer, but don't just take our word for it!

"Chris,   What a brilliant day.

I would like to thank you for you kindness and most of all your patience last week.
This was the first time that a bike instructor "actively listened" to what I wanted to get out of the day and took time to understand my aspirations, trepidations and expectations.  Normally despite the words "what do you want from today" I found other courses to be restricted to "the itinerary", making no allowance for individuals progress or understanding.  I was happy that you allowed me to keep trying techniques until I at least understood the process and got to grips a little with the application. Something to build on.

I might be a slow learner but I do feel I will continue to improve with the type of tutoring you offer.

I will be back.
Only one gripe, the bike was an absolute state when I got home and I left a trail of flung mud most of the way into Bucks,  at least the bike and I looked like  we had been on an adventure. "

" As someone that has only done a few miles before hand and only a limited talent for offroad riding it is great to have feedback on how to deal with obstacles. Chris explained before we started each lane as what to expect, what type of grip to expect and what to try on the lane (such as feeling for the back brake sensitivity )

I found it very useful to try the lanes again once we had had a chat at the end if it. This gave me a second try to get it right OR equally wrong. One thing is for sure the first time you pull the front break and it begins to slide it is very unnerving but if you keep doing it it soon gets easier.

Chris started us off on gravel and then we moved up to wet leaves on gravel each time getting the idea of what differences there were in grip. This initially all being done sat down.

There are so many lanes in Chris's area that he can change the order of them to suit the 'talent' of the rider and is open to people like me wimping out on say knee deep water.

Chris has aimed this training at the Bigger bikes such as the Africa Twin and Transalp (200kg sort of size) where you would perhaps be doing a trip and find yourself in a position of having to ride down gravel tracks with ruts. Thinking about this it does sound like Barnsley in January with the pot holes.

" Great Day out, and huuuuge thanks to Chris for organising this. The day started out with the all important cuppa and obligatory removal of the mirrors. Then we were out on the lanes. Great fun , although some of them were pretty muddy, which made for some entertainment with road-biased tyres. Not too many 'rests' required, but a number of 'victory rolls' were attempted through the course of the day.

All in all a superb day out. I'd say if it's really muddy then more off-road biased tyres than mine would be good. I was glad of the Barkbusters, which probably earned their keep, given the three or four victory rolls attempted, and I've got enough foliage to keep Kew Gardens research department going for a couple of months.

Apart from that a bent gearlever was the only damage - CR85 (foldable) replacement already ordered ! "

What a day. Great craic that was. Thanks to Chris for a great day out and plenty of, ahem, learning. Though I only think it can be called that when the recipient listens!

Learned so much though. Limits of the 700's abilities, limits of my road based tyres and the limits of my talent....limited it is too.

Muddy ruts are ruddy muts. Ouch. Ankle in ice as it seems I've bruised or sprained it. Still, couldve been worse if I hadn't bought the tech3's!

Mud don't like the 700's front wheel or my tyres, or my lack of ability.

Loose, leafy, sand or gravel based ain't so bad. Fun by the end of the day. Loved getting the rear loose. "

" Just had a fantastic day with Ian and Chris. Went up muddy banks with tree roots, along muddy lanes with leaves, clay, gravel, puddles, pot holes and my little bike did it all. Had fun sliding about and learnt to do nothing in a skid. Alas my bike got tired on the last sandy lane but it did involve a gully and everyone needs a lie down at times.

Definitely recommend and can transfer skills from today to the road. So thanks Ian and Chris for a fab day. "

" what a day indeed,

after proving that you really can push 250Kgs of bike, we set off in a quest to find every surface we could to ride on.

I knew the GS should take it in it's stride, even with its road boots, but what I wasn't so sure of was my ability.

with some great pointers from Chris my confidence soon grew and I started to enjoy the ride, bouncing around on gravel, mud, leaves, tree roots, more leaves.

I've never really liked cabbage and when they build roads out of them that scares me even more (Michaella will have to explain that one ) I locked the back end up and it stepped out to the side, I thought I was a gonna but somehow manage stayed upright.

I even managed to get both wheels off the ground just not quite at the same time.

we ended the day playing in the sand and again I nearly lost it but managed to control the slide (just) we were both pretty knackered by this point and I think Michaella slipped on a tree root which brought her down but all was OK.

I did wimp out on the last 'optional' section up and down a bank covered in roots but I'll be back to try that one another time Chris.

so a Huge thanks to Chris for a great day and Michaella for a great company and being a good sport and trying, sorry, DOING it on a dinky 125 "

" Just come back from a days training with Chris.
Time passes quickly when your having fun! Excellent tuition, every aspect of riding off road covered in depth by a very knowledgeable and enthusiastic guy.
Had a GREAT time, looking forward to doing more in the future. " 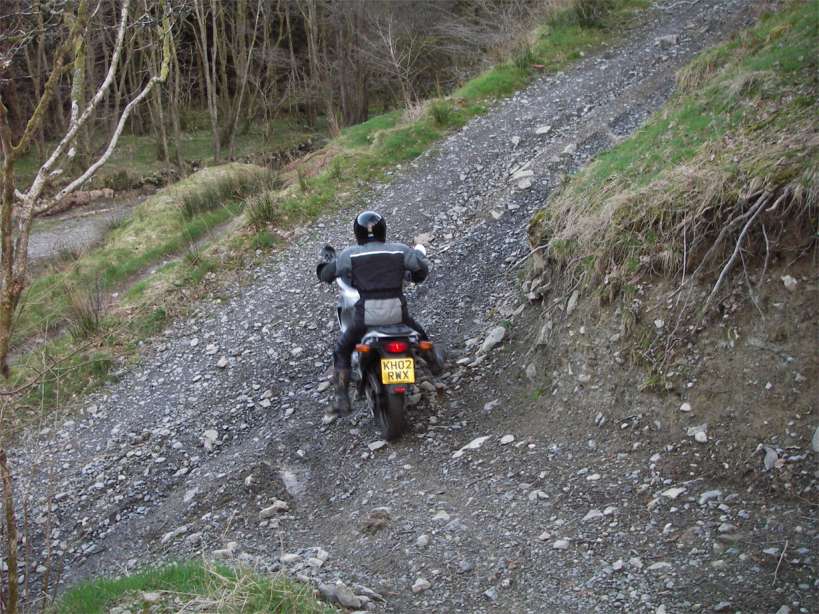